Welcome to Day 15 with Sarah M. Cradit!  Although Sarah is known primarily for her paranormal series, The House of Crimson and Clover of which this book is a prequel, The Storm and the Darkness is heavier on the thriller/suspense than paranormal.  I’ve read all but one of the books in this series and can’t say enough about them – what are you waiting for? 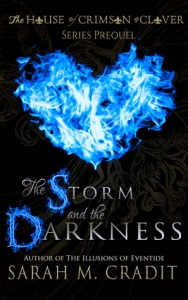 Ana Deschanel made a terrible mistake. The only chance of protecting the other people involved is to flee New Orleans, the only home she has ever known, for the quiet solitude of Summer Island.

Summer Island, Maine (population 202) is not the tranquil escape Ana imagined. The locals are distant and cold, especially her neighbor, the reclusive veterinarian Jonathan St. Andrews. Her only lifeline is the kind but odd caretaker, Alex Whitman. Showing up at all the right moments, he warns her she is completely unprepared for a Maine winter. As the first seasonal storm approaches to whispers of an island shutdown, Ana realizes she may soon be cut off from the rest of the world.

After a surprising encounter with Jonathan’s brother, Finn, Ana finds herself braving the storm to return something to him. Unprepared for the Maine storm, she slips and falls onto the jagged rocks along the shore. The St. Andrews brothers find her in the nick of time, but she remains unconscious. As the storm worsens, the St. Andrews brothers learn there are other, more sinister forces at work closer than they ever imagined.

With no help from the outside world, they must find a way to protect themselves from both the storm, and the growing darkness that looms across the island.

“Cradit’s writing is poetic prose. She knows her narrative and her voice. She clearly writes with confidence in herself and in her story. I love her storytelling style!”- Becket, Assistant to Anne Rice and Bestselling Author of The Blood Vivicanti

How long have you been writing horror/thrillers and what drew you to the genre?

My series is primarily Paranormal, but I love the psychological aspects of the genre, which stem from my love of horror. Anything with the power to get in your head and stay there is a powerful thing. One of the first books in my series, The Storm and the Darkness, leaned more toward thriller than anything else, and I have some future stories planned that call more to this genre.

How did you come up with the idea for your book?

The Storm and the Darkness was born of two separate ideas.

The first was a dream I had about a young woman who flees her life for mysterious reasons, and finds herself in the care/custody of two polarizing brothers.

The second was my experience living in Maine, which, while lovely and quaint on the surface, seems to have much more lurking beneath the surface (I can thank Stephen King for planting that seed). Specifically the small island communities in Casco Bay, off Portland. I always wondered, what happens to them when the big winter storms hit?

So I wrote about these, and added a closet serial killer for good measure.

If you could erase one horror cliché, what would it be?

People acting like idiots. Your worst enemy should not be your own stupidity. A great horror hero/heroine is an intelligent match for whatever evil they face.

I’m currently working on releasing the sixth book in my House of Crimson & Clover series, but more related to horror, I’ve started outlining a horror novella I plan to write next year. Without getting too far into things, the story will center around an unmemorable man who suddenly starts experiencing very memorable things.

The most terrifying movie I’ve ever seen, and this is largely due to the cinematography and unforgettable imagery (especially final scene) is The Descent. Gives me chills to even think of it.

I’ve read a lot of fabulous horror novels, but the scariest to me was probably It by Stephen King (though my favorite works of his will always be the entire Dark Tower series). A close second would be N0S4A2, by his son, Joe Hill.

Sarah is the USA Today Bestselling Author of the Paranormal Southern Gothic series, The House of Crimson &

Clover, born of her combined passion for New Orleans, family sagas, and the mysterious complexity of human nature. Her work has been described as rich, emotive, and highly dimensional.

An unabashed geek, Sarah enjoys studying subjects like the Plantagenet and Ptolemaic dynasties, and settling debates on provocative Tolkien topics such as why the Great Eagles are not Gandalf’s personal taxi service. Passionate about travel, Sarah has visited over twenty countries collecting sparks of inspiration (though New Orleans is where her heart rests). She’s a self-professed expert at crafting original songs to sing to her very patient pets, and a seasoned professional at finding ways to humiliate herself (bonus points if it happens in public). When at home in Oregon, her husband and best friend, James, is very kind about indulging her love of fast German cars and expensive lattes.

Where to find Sarah

5 thoughts on “#BadMoonOnTheRise Day 15 The Storm and the Darkness by Sarah M. Cradit @thewritersarah #books #thrillers”