Today we welcome Nick Rippington to Bad Moon On The Rise!   To hear Nick interviewed about his book by journalist Matt Withers, click here. 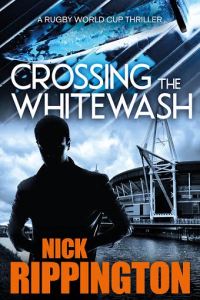 Gangland London collides with rugby-crazy Wales in a suspense-filled tale of two friends torn apart by circumstance. Football prodigy Gary Marshall and best mate Arnie Dolan spend their teen years battling adversity together on the rundown east London estate where they live. Then a series of life-shattering events intervene to split them apart.

Eight years later Arnie sets out on a mission to track down his old sparring partner, keen to impart a shocking secret he has harboured for most of his life. So why is Gary now working in Wales as a sports writer under a false name? And why is he so keen to leave the past in the past? As the world’s biggest rugby tournament approaches the mysteries start to unravel, leading to a gripping climax at the temple of Welsh rugby – the Millennium Stadium.

How long have you been writing horror/thrillers and what drew you to the genre?

I’m a huge fan of thrillers, having started reading them during the school holidays back in my teens when I was moping about the house with nothing to do. My mum said: “For Goodness sake, read a book or something!” I told her I didn’t like books but she chucked me Ira Levin’s A Kiss Before Dying and dared me not to finish it. I couldn’t put it down. Though my book Crossing The Whitewash is a gritty gangland thriller and there isn’t any real horror in it, it’s fair to say I would like to achieve was Levin did. He could mix thrillers like Boys From Brazil and A Kiss Before Dying with horror like Rosemary’s Baby and Sliver. It’s great to be able to do that. This is my first novel though I’ve attempted thrillers before. To be honest, though, this started off as a comedy and developed into a thriller. It’s interesting to see how things can change during the writing process.

How did you come up with the idea for your book?

I’m a sports journalist and have plied my trade in both Wales and England. It was fascinating to see how different things are in the two countries. The Welsh are fanatical about rugby, yet mention the game to some of the hard-bitten hacks working in London and they would be very dismissive. It’s all about football there. When the Rugby World Cup was on I was between jobs, having been a ‘victim’ of the phone hacking scandal on the News of the World. By that I mean I lost my job at 48 hours notice. While I was watching I could envisage how excited they would be in Wales and wondered how one of my former London colleagues might cope if he found himself working there. From that a whole plot developed around the Rugby World Cup, London gangsters and a murder which has massive repercussions for all the characters. The timing is perfect because the World Cup is taking place at this moment in the UK.

If you could erase one horror cliché, what would it be?

Any chance Zombies could be a bit more exciting?  They seem very one dimensional and quite easy to outthink I would suggest.

It’s a kind of Alice in Wonderland with guns, fighter jets and a tank. I thought I had discovered the perfect ending to the TV series Lost only for them to cop out with the purgatory idea. Mine was much better so I started writing a book around it!

As a writer you can’t help but feel a shudder go through you when you see or read Stephen King’s Misery. It’s one of those things that doesn’t take too big a stretch of the imagination to see happening. I don’t THINK I’ve got any fanatical fans who would go to those lengths to save a character in my novel, but you never know. Anyone can buy or read your book!

Proudly carrying out the job of the newspaper’s Welsh Sports Editor, he was made redundant with only two days notice when he was informed the newspaper was closing down while on a holiday break in his home town of Bristol. He was never allowed back into the building, investigators taking charge of his computer to learn the secrets of his Fantasy Football teams. He was handed the contacts of his desk in a black binbag in a Wapping car park.

Now one of Richard Desmond’s minions on the Daily Star and Daily Star Sunday, Nick has just completed Crossing The Whitewash, a suspense thriller in which gangland London meets rugby-crazy Wales in the build up to the Rugby World Cup.

In a previous life Nick was an Executive Editor at Media Wales – the organisation that produces the Western Mail, South Wales Echo and Wales on Sunday in Cardiff – and in his spare time has written several popular blogs including Frankie Prince’s Bovver Boots, which is published each week on the Bristol Post website.

A father of two, Nick lives with wife, Liz and youngest daughter Olivia in Newbury Park, near Ilford, Essex.

Where to find Nick:

Also on iBooks, and available to order from most major bookstores