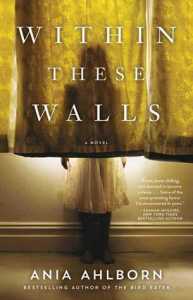 supernatural thriller questions: how far would you go for success, and what would you be capable of if the promise of forever was real?

With his marriage on the rocks and his life in shambles, washed up crime writer Lucas Graham is desperate for a comeback. So when he’s promised exclusive access to notorious cult leader and death row inmate Jeffrey Halcomb, the opportunity is too good to pass up. Lucas leaves New York for the scene of the crime—a split-level farmhouse on the gray-sanded beach of Washington State—a house whose foundation is steeped in the blood of Halcomb’s diviners; runaways who, thirty years prior, were drawn to his message of family, unity, and unconditional love. Lucas wants to tell the real story of Halcomb’s faithful departed, but when Halcomb goes back on his promise of granting Lucas exclusive information on the case, he’s left to put the story together on his own. Except he is not alone. For Jeffrey Halcomb promised his devout eternal life…and within these walls, they’re far from dead. – Goodreads.com

Let me start by saying this is by far the best horror story I’ve read in quite some time. I’ve heard nothing but good things about this author, but this is the first book of hers I’ve had the opportunity to read – and I plan on getting to the others.  Just when I thought I had things figured out – I was proven wrong by some unexpected twist, turn, or surprise.  The following is a peek into my head while reading this book:

“Oh, I see where this is going….wait…what?….Okay, it’s obvious what’s going to hap…um… didn’t see that coming.”

And I love it when books can surprise me that way.  While reading this book, it’s almost impossible not to make comparisons to Charles Manson, and he’s mentioned a few times during this story but, although he and Jeffrey Halcomb have some things in common, don’t assume this book is just a retelling of that story.  Far from it.

The shifts between past and present with revolving POVs between Lucas, his daughter, and a Halcomb victim gave a more well-rounded picture of the true nature of Halcomb and tied the story together at the end.  The characterization was exceptional – I initially felt sorry for Lucas while he watched his life fall apart, but as his character evolved throughout the story, I really began to dislike him and wanted to smack him a few times.

Within These Walls certainly isn’t lacking in creepy atmosphere or tension and is a complex blend of a haunted house, mystery, and thriller all tied up in a compelling and engaging package.  This book will be released April 21, 2015 and I highly recommend it to horror/thriller fans.

This review is based on a digital ARC from the publisher through NetGalley.

4 thoughts on “Within These Walls by Ania Ahlborn”